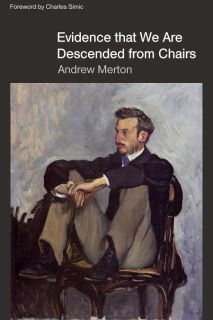 Three poems from Evidence that We Are Descended from Chairs

Your Date With Death

starts with low expectations.
You don't even bother to shave.
Well, forget what you've heard about her.

She's Wendy, your high school sweetheart,
still eighteen, dressed in white.
(How could you have dumped her?)

She takes your hand
and you think peaches, waterfalls,
the smell of suntan lotion

on bare shoulders.
Now you can finally dance--
not the tango you once craved,

but a mannered waltz
in a mirrored ballroom,
ending with a curtsy and a bow.

Later, at her door, she thanks you.
Feeling shy, you ask,
What's it like, being Death?

On good nights, she says,
it's like this,
and she kisses you hard.

She brings the coffee. It’s just the two of us, the waitress’ grey braid down to her ass, my stubble vibrant. Pretend it’s summer, she says. Illusion helps. You know the drill: an asphalt road is a river of magma. Windswept snow is a witch’s veil. How do you want your eggs?

Laid by Druid chickens, I say, playing along. Sunny side down.

How old are you?

Sixty-one in human years. An artist friend says my life is a cubist self-portrait, subtly layered—infinite eyebrows, she says, a girl could lose herself in those. If you ask me, I’m a bottle of bad scotch, three-quarters gone.

The waitress sits down, pours herself some coffee. Your artist, is she genuine? Does she swim naked in the North Atlantic? Has she an affinity for men in lace? Is she drawn to tequila and other wormy things? Can she spin shit into steel?

She pats my hand. It’s all right, hon, she says. There’s no such thing as bad scotch.

God wakes from Her nap
in one of Her moods,

just in time to change the tide.
She puts on a rhinestone-studded jumpsuit,

purple stilettos and lipstick,
slings a boa around Her shoulders

and struts out on deck.
She’s gorgeous, if you like that sort of thing.

And—admit it, pal—you do.
Yes, you, in the faded blue blazer,

staring over the railing,
working up the courage to jump.

I’d turn around if I were you.
Can’t you feel the current shifting?